Determined to continue the conveying of his particular views and art in the most peculiar places, from Al-Azraq refugee camp in the deserts of north Jordan to abandoned factories in Croatia, Pejac recently completed a series of interventions within the oldest prison in Spain, the Penitentiary Center of El Dueso. Located at the entrance of artist’s hometown of Santander, overlooking the Cantabrian sea and surrounded by marshes, the prison built at the beginning of the 20th century on the remains of an old Napoleon’s fort was another challenging setting to carry out his poetic interventions.

For 11 days, its walls, courtyards, and corridors became the artist’s workplace, giving life to the Gold Mine project in that sense. The project integrates three singular pieces, which as a whole represent the value of the human condition, its resistance to adversity, the need to create, and its desire, above all, to leave a mark.

“A prison itself is a place wrapped in harsh reality and at the same time, I feel that it has a great surrealist charge. It is as if you only need to scratch a little on its walls to discover the poetry hidden inside.” — PEJAC 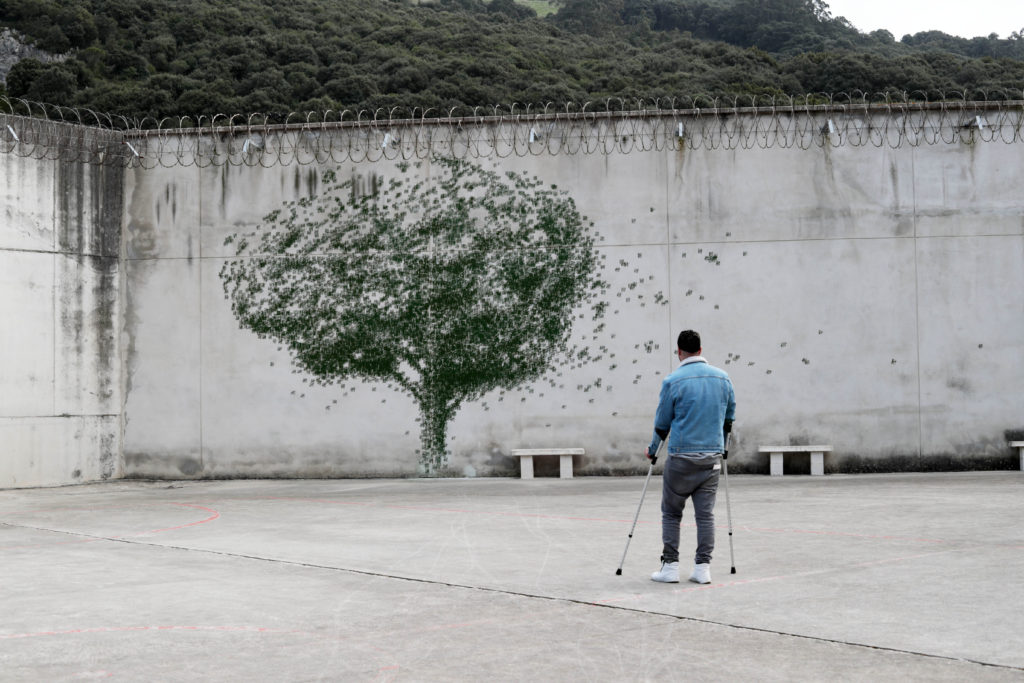 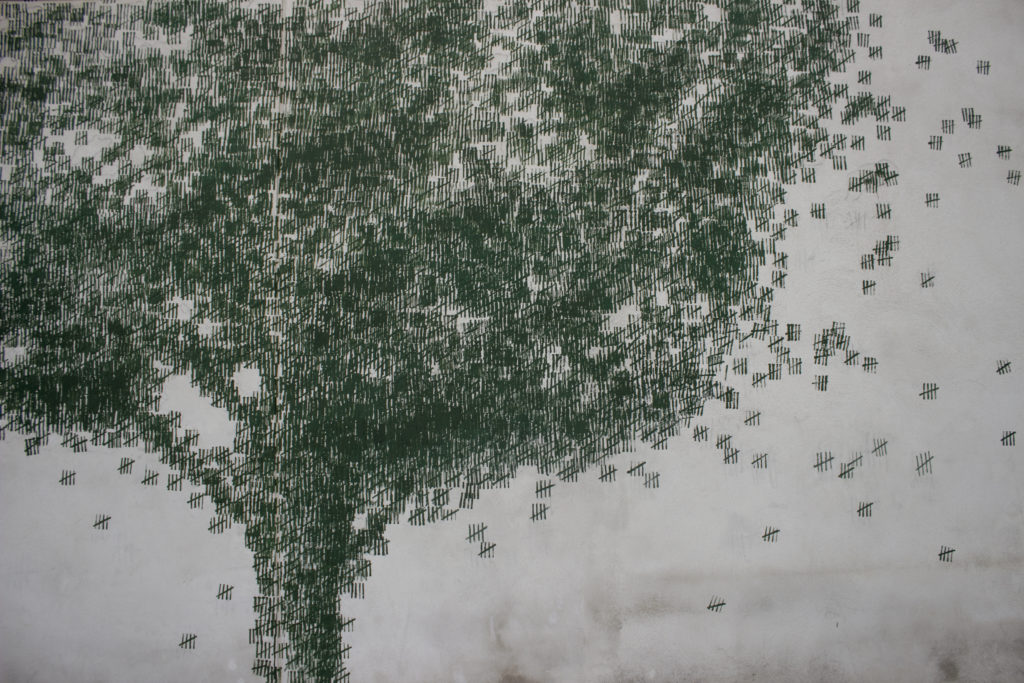 THE SHAPE OF DAYS

“This mural speaks about perseverance as one of the most valuable virtues between El Dueso’s walls. With the help of the inmates, I painted the iconic hash marks originally drawn on the walls of the cells to keep track of the days “inside”. We painted thousands of them, playing with shapes and superimposing them to create volumes that finally represent the shape of an immense tree that contains the passage of time and hope.

Each day inside is a day that brings you closer to the freedom and the holm oak forest behind the walls of this prison.” 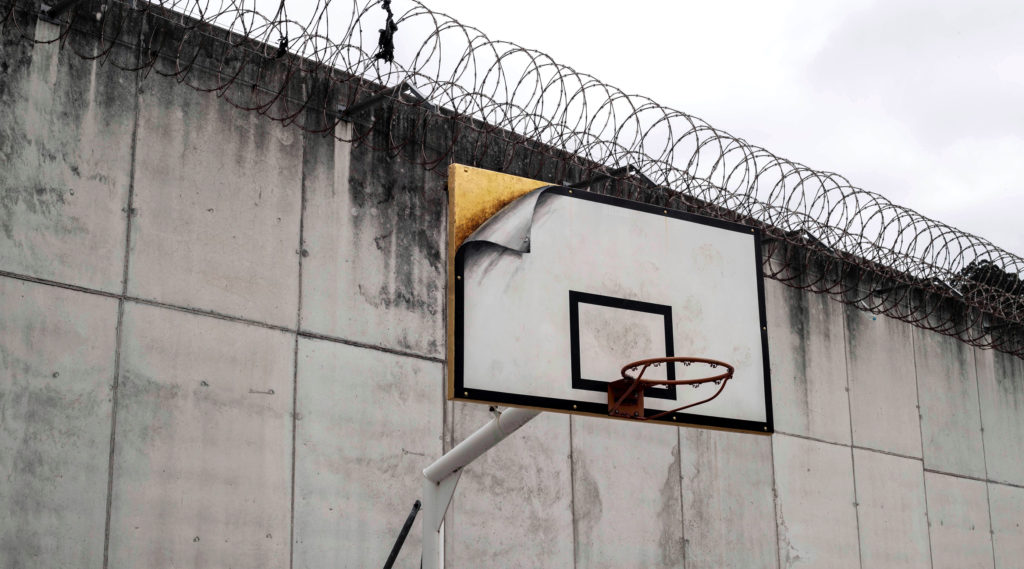 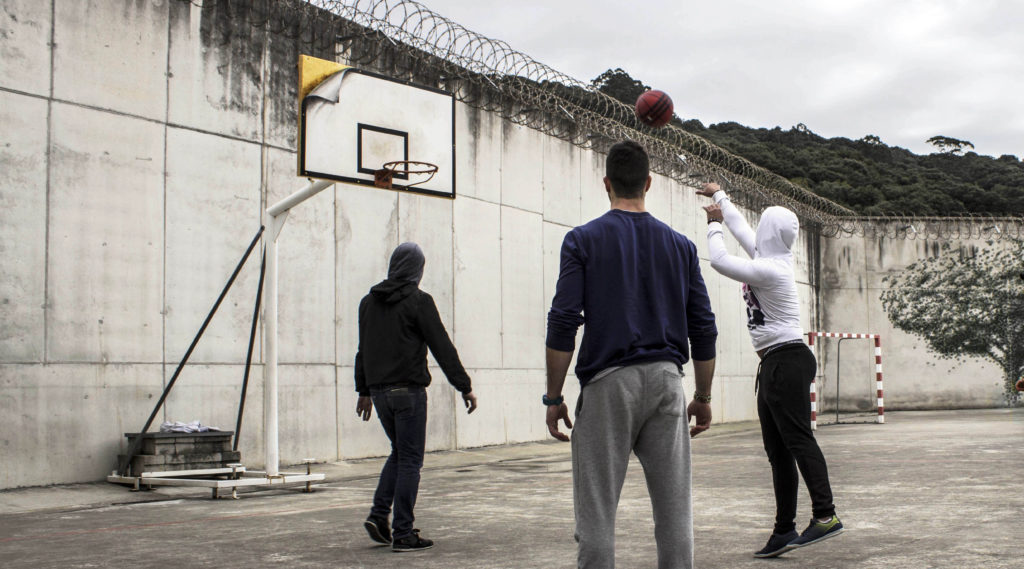 “For this piece, I used the real 22-carat gold leaf on the basketball court backboard from the prison’s courtyard. The illusory visual effect of trompe l’oeil has done the rest, indicating that sometimes it is gold that does not shine.

I like the idea of transforming an everyday object into a luxury object so that the inmates can use it and play with it daily. Creating luxury within everyone’s reach.”

“When I first saw this corridor with only cement and barbed wires, I felt I needed to add a poetic element that would detract from the hardness and pressure of those who pass between these walls daily.

Let’s wanted to imagine that they are actually made up of sliding doors which can open as if it were an immense built-in wardrobe. Let’s imagine…”

This project was made with the support and commitment of Eva Ranea, General Director of Culture for the Ministry of Education, Culture, and Sports of the Government of Cantabria.

Special thanks not only to the inmates who with their response, attitude and involvement have made this possible but also to El Dueso Penitentiary Center’s management and its educators who have put so much enthusiasm and effort into the project.