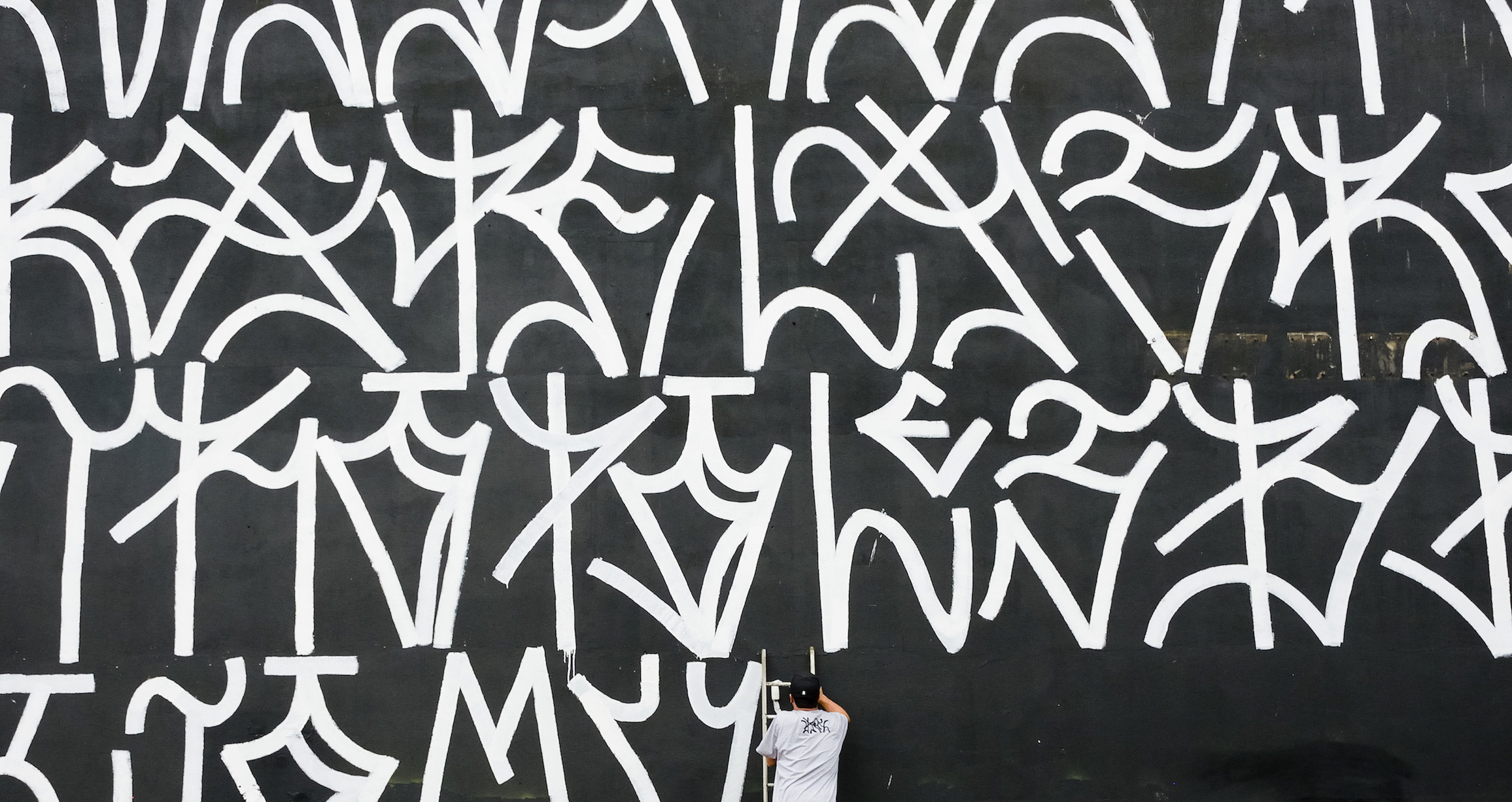 Just as Carnival, Copacabana or football are synonyms for Brazil for the wider audience, people interested in urban life and especially urban culture will likely think of buildings covered in peculiar scribblings when thinking of the largest country in South America. These prison tattoo-like visuals on the skin of the Brazilian urban surface are called ‘pixação’, and while they are seemingly similar to tagging or graffiti, they are actually representing their own genre. Seen mostly through metropolises of São Paulo and Rio de Janeiro, this distinctive street writing began in the 1940s and 50s as political statements written in tar and was reborn in the 90s when typography of heavy metal record covers started influencing the styles.

With this in mind, the birthplace of heavy metal and the cradle of the aesthetic of the lettering of pixação seemed like the perfect setting for the European debut show of Cripta Djan, the internationally renowned Brazilian pixador from São Paulo. After introducing pixação culture in Paris and Berlin, and filming a feature-length film about it in 2012, Djan will be presenting his solo show In The Name of Pixo from 13th – 22nd July in Birmingham. The exhibition is produced in close collaboration between Suben Art Management and Javelin Block.

The artworks will be presented in the Tramshed, a former rolling mill located in the centre of Birmingham’s Jewellery Quarter conservation area, and bring an insight of this unique form of social protest from São Paulo. The exhibition will consist of 25 paintings of words and slogans reflecting on social injustice, usually painted by self-taught and often economically-marginalised people. The artist will exhibit two of his series – “Peripheral Manifesto” and “Code of Conduct”, however, the show will also provide an immediate introduction to the rich history and socio-cultural significance of pixaçao culture itself through selection of authentic photographs, legal documents from artist’s lawsuits, timelines, and projections of pixação-related films. A limited edition print of one of the artworks will also be released and available to purchase at the exhibition.

The series ‘Peripheral Manifesto’ carries the transcription of paragraphs of the manifesto titled ‘The Mute Cry of the Invisibles’. In this manifesto, the pixaçao is a cry that spreads through the streets of a great Brazilian metropolis, a mute cry of a whole class of people from the peripheries that are invisible to society. Using paint and the urban landscape as their canvas, these young people have created a way of escaping the social invisibility in which they live.

The series ‘Code of Conduct’ introduces works constructed with words representing the code of conduct of streets lived by the pixadores. A real complex culture that has its own signs, its rules of honour, its techniques, its way of speaking, and uses an unfamiliar vocabulary for those who do not belong to that world.

More information on Cripta Djan can be found at www.criptadjan.com 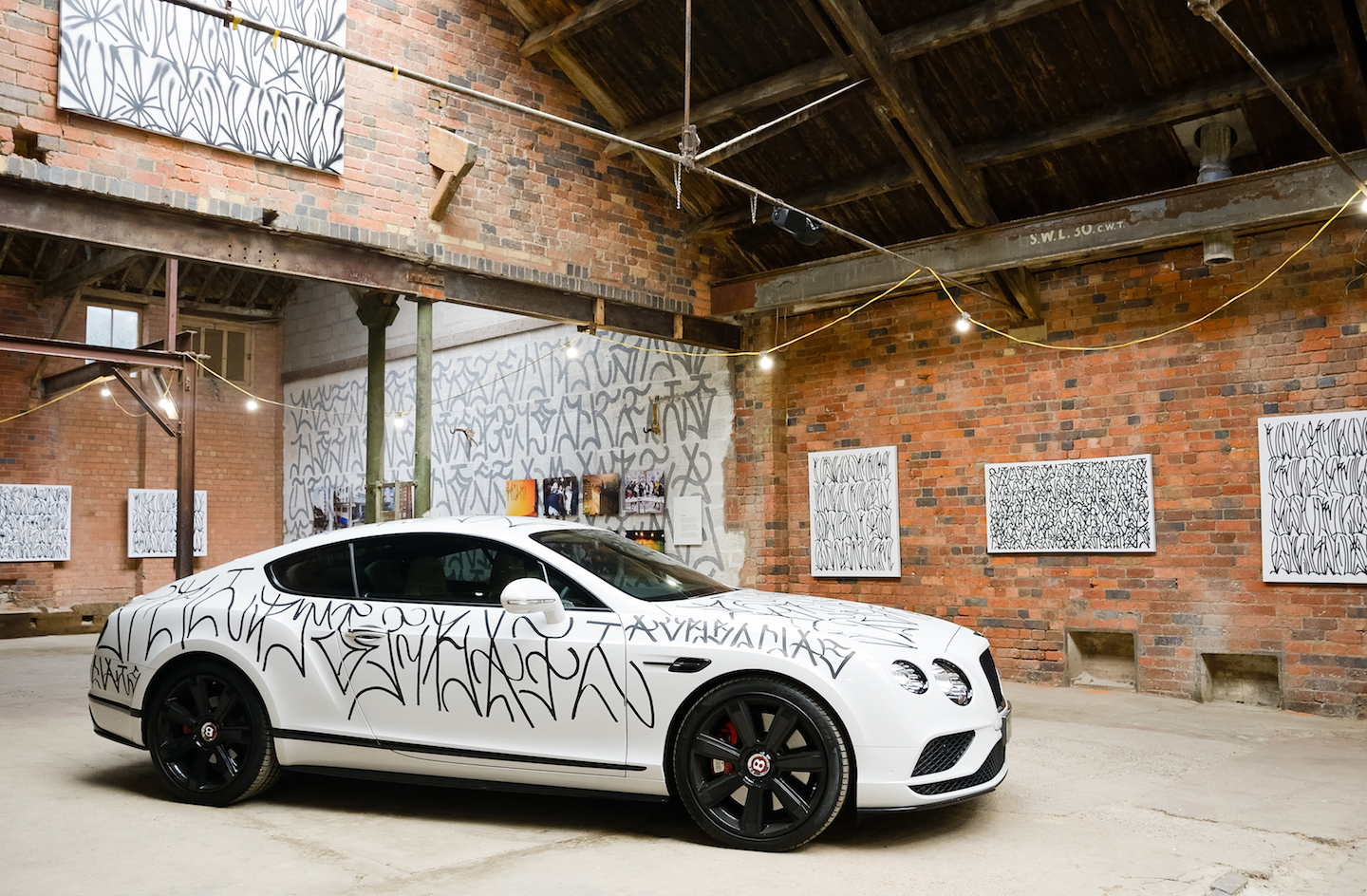 Real schooling of Djan has come from the streets of Sao Paulo. Given the absence of an inclusive social structure and the lack of the economic and cultural capital required to break out of his class position, Djan decided to join a delinquent social organization twenty years ago. It was his way of buffering the symbolic abuse he suffered in his childhood days and early youth.

Djan uses Cripta as his first name because he is inseparable from the São Paulo social movement known as pixação, a local version of tagging. Cripta is a group-assigned alias, the name that everybody belonging to this collective goes by. As a kind of moniker, they aspire to and uphold both the streets in São Paulo and certain socialization spaces onthe edges of society, governed by their own rules of conduct.

Given his outstanding personality, ample practical and theoretical knowledge of pixação, and former leadership role in different groups, Djan is currently the key figure in the process of legitimizing this culture situated somewhere between social and aesthetic phenomena. His work has taken him to places never before explored by peers,

thus turning him into an interlocutor-mediator between the world of pixadores and society as a whole. This has not always been a non-violent path to follow since it is a question of moving into social spaces of the dominant culture to which both state and society have denied him access since childhood.

The quality of Djan’s studio work lies precisely in the counterpoint between the words Cripta and Djan: social and individual, habitus and psyche. He uses a code that distinguishes him socially as his own, distinctive language. Djan’s story shows how a young transgressor from the urban periphery has gotten involved in the discussion of contemporary art without losing his ties to his own social base. 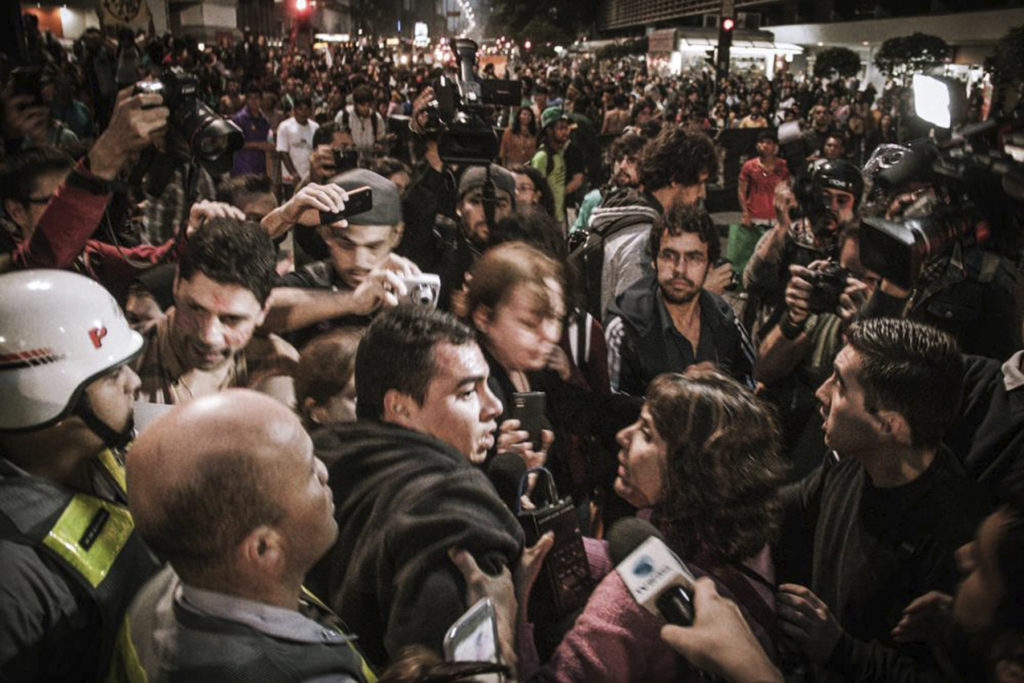 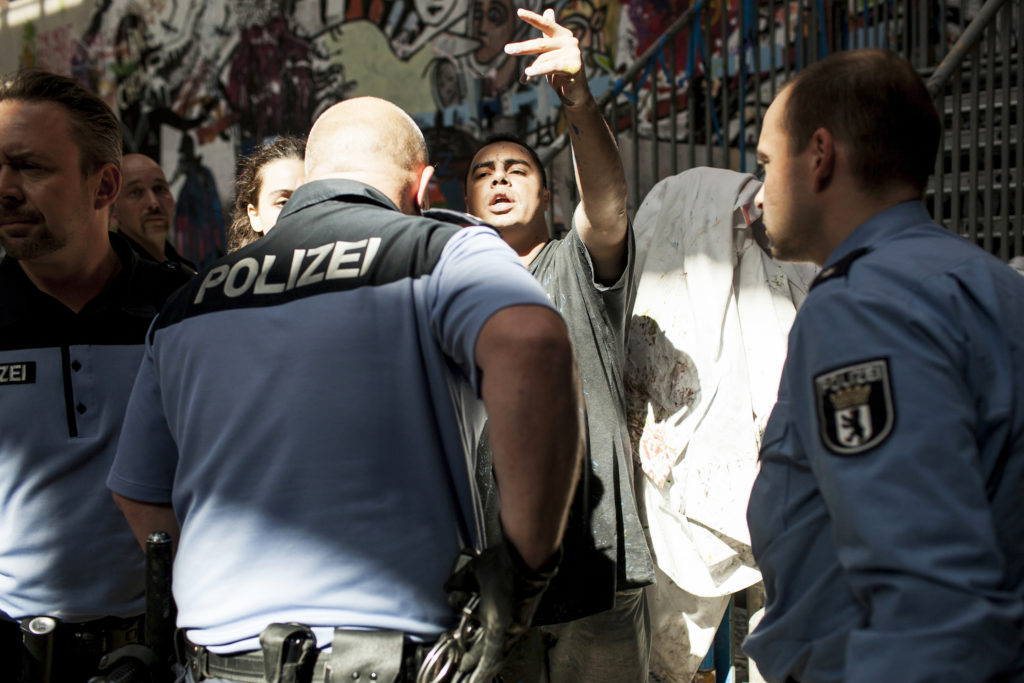 Pixação writings first emerged in São Paulo in the 1940s and 50s, in response to the slogans painted by political parties across the streets. Written in tar (piche), pixação originally meant writing in tar and was directly focused towards the politics and the system.

After it almost disappeared in the 70s, a group of youngsters began writing their names and the names of their crews in the 80s, reviving the movement to what it’s known for today. Aesthetically influenced by the runic-inspired typography of heavy metal and punk album covers, the young Paulistanos came up with their own variations of this type of calligraphy.

Pixadores seldom create visuals and are using only letters as the form of expression. Their ubiquitous calligraphy is composed of straight lines and sharp edges, and the words written in this style carry a strong socio-cultural significance.

Stripped of any decorative value of their work, the primary goal is the visibility and the placement which gains them respect in the closed community. Aside from fame, visibility and adrenaline, the most important motivation for pixadores is anger, primarily directed against the city and its officials. Pixação seeks to positively degrade the urban environment by “assaulting the city”, confronting the system that provides very little opportunity to a large part of the population.

This anger is rooted in a social injustice that is connected with the pattern of uneven urbanisation that began in the 1940s in the country with extreme economic inequality issues. Unable to find affordable housing in and around downtown, working-class Paulistanos were left with two bad options: join the urban poor in one of the city’s growing favelas, or relocate to the periphery that lacks the basic public services associated with modern urban living.

Although often compared to graffiti, there is a significant difference between the two, especially in Brazil, as graffiti is considered a form of art and pixação is not. Due to its brutal and effective way of covering the city with the thoughts of its members, pixação has been described as a social protest rather than artistic movement. Using a strict street code of conduct, where values such as respect, proceeding, courage, humility and loyalty go hand in hand, pixação promises to keep on punishing the fortunate until they produce a less punishing world. 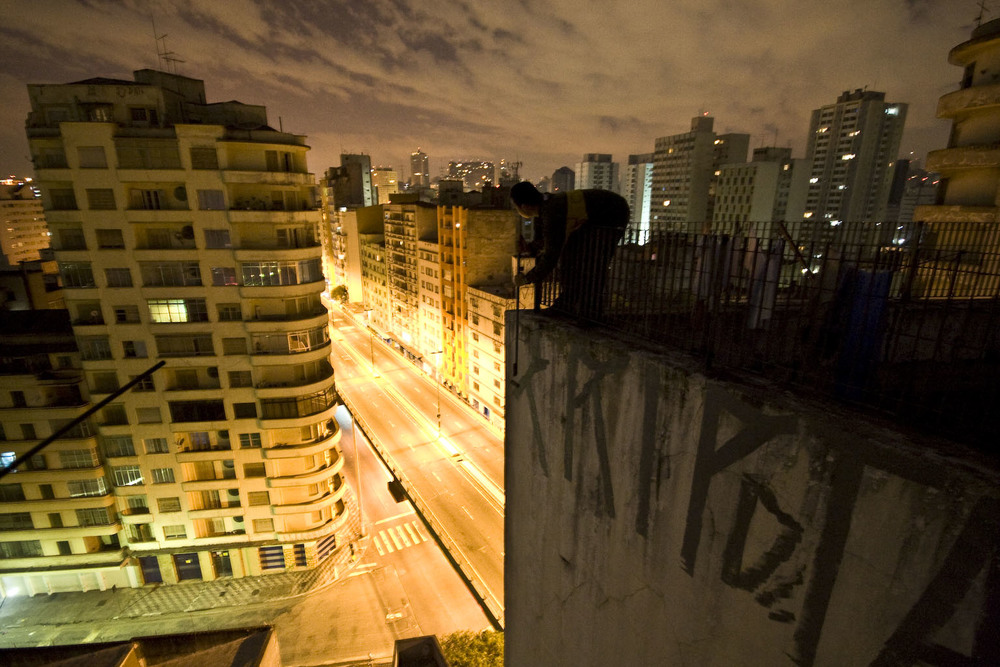 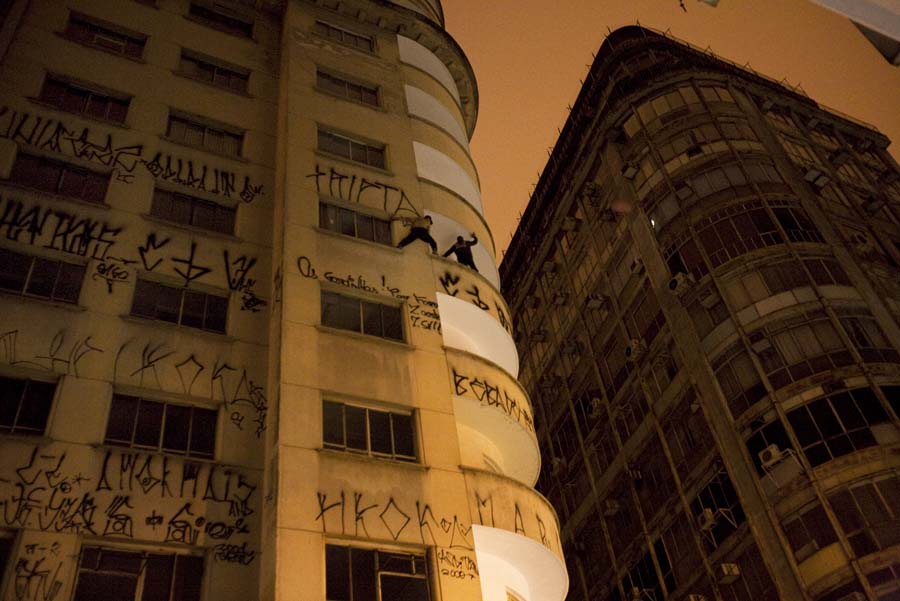